Can Old Hollywood be made new again?? 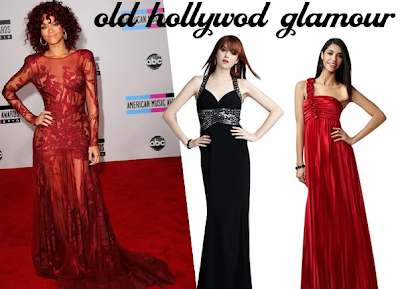 CHALLENGE FOUR: I'M READY FOR MY CLOSE UP MR.
DEMILLE

"The Hollywood Gown" in golden age Hollywood was a time when there were gowns designed for film stars and movie roles, by designers known worldwide. Designers such as Adrian, Edith Head, and Irene, were known for their film gowns. Fashion and the movies have been married since the first moving pictures. There were times when the gown made the film and made even bigger the starlet who wore it, catapulting her into the next big "it" girl.

This challenge is to create the perfect "Hollywood Gown". The gown has to be modern while also giving a nod to those famous Hollywood designers of yesteryear. The gown must be camera ready and starlet bound, it must look good from all angles and must provide that perfect "Hollywood publicity still." 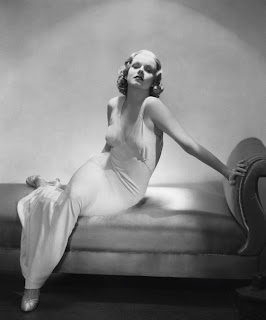 Costume Designer: Adrian Dress: A vision in white satin, cut on the bias.

Actress: Jean Harlow, the actress who was attributed to have originated a new vision of blonde by bleaching hers white, a trend that would last as far the 50's - remember Marilyn Monroe?? 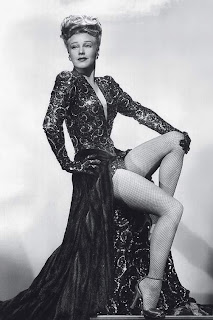 Costume Designer: Edith Head Gown: One of Hollywood's most expensive with a mink over skirt and a beaded inner skirt. Shoulder pads, gloves and netting were a must.

Actress: Ginger Rogers, who danced across the silver screen most often on the arm of Fred Astaire would favor a shoe that disappeared into her dress - a trick to make her long legs look even longer! 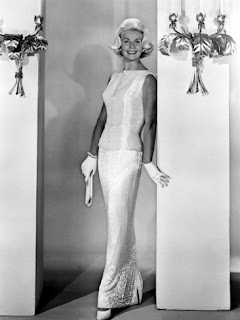 
Costume Designer: Irene  Evening Gown: Reminescent of the style of the actress.

Actres: Doris Day, known for her "good girl" look would have worn a gown like this of the finest silk, sometimes with a little jacket - but no matter how it was made, it always was a wow factor!

All three were popular designers for Old Hollywood, but Edith Head is probably the most remembered today because of her work with Audrey Hepburn. However Irene (Lentz) perhaps has had the most influence in modern-day movies - not because she designed later than the others. Midnight Lace was the last movie she designed for; much of her design work began in the 1930s; Easter Parade is her most well known movie. 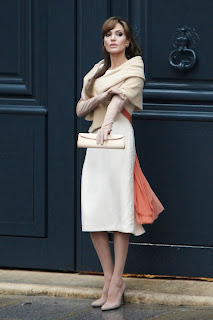 Her suits are worn by Kyra Sedgewick on TNT's The Closer currently airing. But, it is one of Angelina Jolie’s outfits in her recent film, The Tourist, that most beckons us back to old Hollywood in a new, updated, while keeping the tradition way.

Yes, it was inspired by a design by Irene (Lentz), but "reenvisioned" by Colleen Atwood who may be one of our new age designers making a name for their Hollywood designs as well. This ensemble featured a caramel shawl, gloves, and an ivory sheath while the original outfit included a jacket. Atwood told People Magazine she wanted to make it more luxurious so she designed a wrap instead. She also made the outfit more modern and gave Jolie gloves to wear because she "was filming in the land of fine gloves." 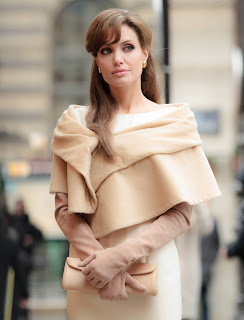 To me, Ms. Atwood has demonstrated what this challenge is all about. Through her "reenvision" she stayed true to the glamour obvious in all the Old Hollywood ensembles while not only bringing it up to date, she made it more luxurious. This spirit of Old Hollywood, after all, exuded glamour, so I don't think just deconstructing or modernizing it without a nod to such glamour will satisfy these judges. 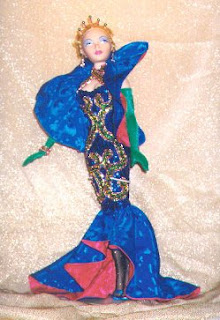 In fact, your judge for this challenge will be a true original doll artist, one we might even call Glamour Man! Jim Faraone's one-of-a-kind creations were the epitome of glamour. Designs he once had available for sale came with all the beadwork and sequins hand done, one at a time and not glued on. Each doll came with a stand and was placed in an autographed designer box with his logo on the cover with his salutation, "I do hope you enjoy this glamorous, yet sometimes humorous journey into my miniature world of fashion." He was so popular at it he even wrote the book about it, well actually several books, in his Fashion Doll Makeover series where he not only gave how-tos and examples of his own work; he also used them to promote other artists. 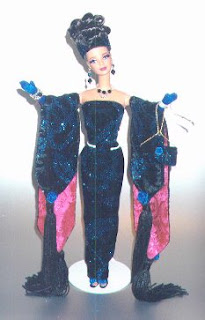 Yes, Jim Faraone is a self-proclaimed collector of dolls, paper dolls, paper toys, miniatures, 40's and 50's plastic dollhouse furniture, metal doll dishes and accessories, autographed celebrity photos, and dust! But for a lot of us Jim is a mentor that we're proud to call a friend. Nowadays he has turned to fulfilling his need to do doll art by producing the wonderful paintings he shows at his International Fashion Doll Covention. And what a fun convention it is -- A Celebration of ALL Fashion Dolls, this year's theme will be Shock, Rattle 'N' Roll, and he'll also be celebrating IFDC's 10th Anniversary. Where else could one not only see the latest doll offerings from Manufacturers as well as Artists, attend informative how to seminars, do a little Steampunk Rock Bowling, play the slots, and enjoy a Raining Men American Bandstand Karaoke/Dance Night?? No where but IFDC with the doll artist's friend, Jim Faraone. Read more about it on the IFDC website by clicking here.

Jim will be joining your regular panel of equally nice, doll and doll artist lovin' judges: Malinda Zelazo, Hilda Westervalt, and Rob Thompson. Malinda and Hilda are new while Rob has been with CDDC since the beginning. Their critiques, to me, elevates CDDC from being just a "pretty doll" contest because along with their critiques they furnish information to help the designers do a better job. 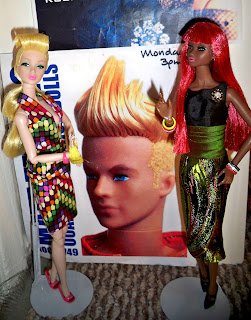 First we have Malinda Zelazo. She grew-up in San Jose, Califronia but currently lives in Sacramento. Malinda is the first of our non-doll designer judges, and was not chosen for her good design or sewing skills, rather ofor her good eye for detail she uses for selecting new addition to her OOAK collection. Malinda has been collecting fashion dolls for over 20 years. Her main love is Francie, but she also likes Mod era Barbies, Momoko, Misaki, and Poppy Parker. She loves fashion and brings to the table the courses in fashion design and history she has attended. And although she not been so successful at making the fashions, she has made many talented friends over the years who are doll artists and is constatntly amazed at how creative doll collectors are! Malinda is excited to be a part of CDDC and looks forward to seeing everyone's entries for each challenge! 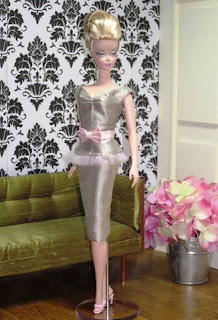 Our next new judge is Hilda Westerveldt, who is no stranger to all the Barbie collectors I am sure. Hilda has been sewing since she was in High School but then sewed mostly for herself. She started a business of handmade hats in 1993 under the name Bellissima. Fast forward to 2007 and when she started sewing for dolls. Hilda have always loved anything in miniature and the idea of indulging her love of vintage fashion in miniature was very compelling. Her favorite period is the 1950s to early 1960s and she simply adores the fashions from the show Mad Men, and loves to create them. She has a wonderful time designing. She calls her doll shop Bellissima Couture, and it is located on our sister site, Couture Doll Shop - right on Main Street - last shop on the right on the last row - just click here to find it. 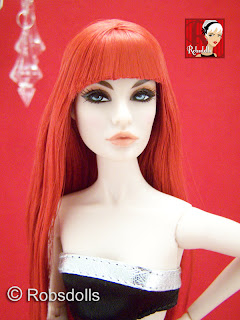 Last but not least is Rob Thompson. Rob is doing a ton of charity auction dolls again this year, and I am sure they are grateful because they usually raise from $5,000 to $7,000 each year for various charities. This year his dolls will benefit Grant A Wish, National Barbie, IFDC, Kelly Convention, and the Italian Doll Convention. He also cotinues working with the NOH8 campaign.charity, and that has been a huge job, as well as collaborating with Dressmaker Details and Randall Craig RTW for charity event dolls. Rob's new line of doll work, “Razor Rain,” was previewed at the FR convention last year and sold out. Besides his doll work, he has actually started a novel, but has no idea when he would get it finished - nor was I privileged to know the topic, but we can all read his articles in FDQ from time to time. Rob also has a shop on our sister site, CDS, first row Couture Court, 2nd from the left, just click here.

And that concludes this post, tune in next time when more winners will be revealed!
Posted by Unknown at 10:12 AM