This week the Far East inspires our challenge.  We go to the land of the rising sun and take one of the most recognizable and famous national dress to the couture realm.  The traditional Japanese kimono is one of the most beautiful forms of dress.  In this challenge you will take a traditional kimono and turn it into a couture fashion.  The gloves are off and the fans are down on this one, the judges want to see the kimono looking like we've never seen it before.

A simple definition for a kimono would tell you it is a long robe with wide sleeves, traditionally worn, with a broad sash as an outer garment, by the Japanese.  However, that would be a far cry from telling you all the intricate details and history of this garment.  Japan has a very rich textile history, a major focus of interest and artistic expression being the kimono.  I am neither Japanese nor would I pretend to have studied their culture, but from my research I understand the traditional translation means 'the thing worn' - which won't come close to fulfilling this challenge...but read on, I promise I will get there.
The term kimono was adopted first in the mid-19th century. Prior to that the garment was known as a kosode, meaning 'small sleeve', a reference to the slender opening at the wrist. Originally worn by commoners, or as an undergarment by the aristocracy, the kosode, or kimono, had become the principal item of dress for all classes and both sexes. It is still, today, an enduring symbol of traditional Japanese culture. 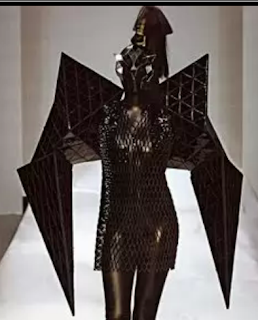 However, some of the today's kimono-styled garments won't be your Mama's traditional kimono.  These are the garments I believe the task master for this challenge (Larraine Elcock, your host) makes reference to when he suggests we say 'Hello' to fashion....while also saying Sayonara or 'goodbye' to the traditional, straight-seamed garments of yesteryear.  Tradition has nothing to do with what you are being asked to create. Every day is a new day and it needs to be filled with new ideas and new looks. This process not only supports the designers, but it also effectively wows the customers and gets them in the shops more often; after all, multiple visits can mean multiple sales.  This may be a key goal for you if you now or later intend to sell your fashion...but  I digress.

Research on specific designers like Keiichi Muramatsu and co-designer Noriko Seki and designer Yohji Yamamoto, or key words like runways of Tokyo and Japan Fashion Week will reveal that the latest Japanese fashions are not just pop or cutesy.  Rather, if you look closely you may spot some elements of the kimono creeping in.  If you want to find some kind of kimono styling just Asian offbeat styling just Asian offbeat enough to wow the judges this week, you may want to just look to Oriental designers such as Guo Pei from China, who gives some of his designs a most origami twist. 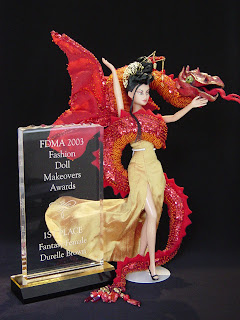 You might even want to examine the garments shown here from your own guest judge, Durelle Brown.  From one of her early original OOAK creations with non-removable clothing you see the essence of Oriental she worked into this award winning fashion.  In one of her more recent fashions you see a more modern but still very kimono-influenced styling.  This is definitely saying Konichiwa to Fashion - think deconstruction of the elements and you should not go wrong in this challenge. 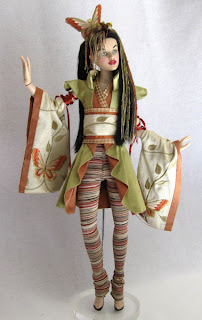 Now on with my introduction of Durelle Brown.  Ever since she discovered the fun exploration into unusual doll design some collectors venture into, Ms. Brown has been wowing audiences with her multi-faceted designs.  She doesn't dwell specifically on any genre, but when she puts something out there you know just exactly the look she is going for.  Alice's Red Queen, to be revealed this weekend in an event for Couture Doll Shop, and Little Mermaid's Ariel, currently featured in an FDQ article, are two of her latest designs that are like no previous presentation of these characters - and both are designed for a most popular doll, Ellowyne, collectors love to both dress and sew for. 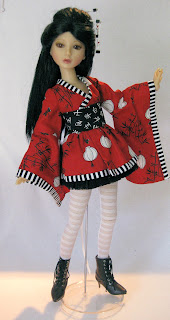 Her "hobby" keeps her rather busy these days designing and creating prototypes for Marie Osmond dolls to presenting detailed workshops at conventions like IFDC and Tonner, and even at the recent IDEX showing.  Yes, there is plenty to fill this designers off hours.  Durelle also works full time as a designer for Ethan Allen Design Centers, so we can be lucky to have her come in and not only help judge this competition, but to also give some insight into this challenge or a little nod of encouragement to those designers who step up to the plate when she does her comments. Let's all say Konichiwa to Durelle, too! 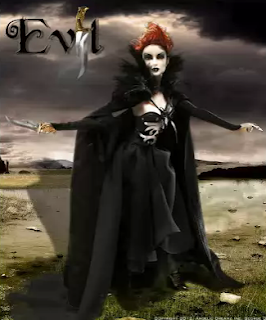 Not only will you be able to see Durelle's work in the current FDQ, you will most definitely see one of our sponsor's most beautiful Jamieshow doll stylings, as it graces the cover.  Of course I'm talking about George Gonzales, the driving force behind the ever-popular, ever-growing, Angelic Dreamz doll emporium.  This Grace Sculpt, featuring a Flaming Red hair wig cap, is versatile and ready for a little restyling if you dare as it comes with an additional smooth cap for wigs.

She is called Evil I would guess because she is so wickedly fashionable.  Nothing but the latest is her black chiffon dress boasting a metallic laser-cut breast plate. Other accoutrements
include a velveteen cape complete with laser cut metal epaulets and black feather collar as well as the deadly knife and finger holster in silver you'll see her wearing. The doll itself would be enough to make us all salivate but you'll be squealing when you see this ensemble.  She is made of the wonderful SmoothJ resin, has 19 points of articulation, to die for JS shoes, and blue green "killer" eyes...well you get the picture, dahlings -- can you say must have for 2012?? 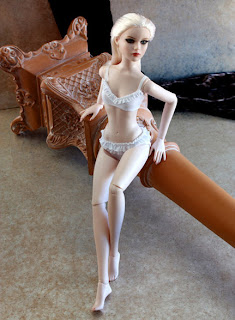 He was also featured inside the cover in an article titled Beautiful Villains by our sister site, CDS.  You will love revisiting his beautiful but deadly Swan.  And, if that wasn't enough, it was recently announced that George will be hosting the debut convention for his Jamieshow doll that will take place on September 28th-30th, 2012 where his storefront, Angelic Dreamz resides,  Canandaigua, New York!  You'll want to get your reservations and your plans in order now if you want to take advantage of this great convention.  Wow, we are lucky, indeed, to have this new sponsor who will be providing the Platinum Cami Basic for our First Place Intermediate Division winner. 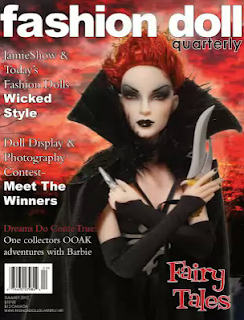 Another of our great sponsors is Pat Henry and FDQ magazine.  One can hardly think of one without the other as Pat is, indeed, the driving force behind this beautiful magazine that brings us all the latest doll news each quarter.  You'll want to get or renew your subscription in anticipation of seeing First place in each division being featured in an upcoming issue as part of the CDDC prize package.   She will also be presenting our Photography Winner with her best-selling book, In Focus - Digital Photography for the Doll Collector.  If you were going to add just one book to your library of helpful doll references this year, this one would indeed be the one to "focus" on.  Thanks to Pat and all our great sponsors - you really sweeten the win!
That concludes this post, my pretties, but stay tuned - next I'll reveal the winners of this fine challenge.  Remember stay hip and chic -- and if you aren't into that personally - just be sure your dolls are.  Most of all, have a ball; doll collecting is all about FUN!
Posted by Unknown at 12:38 PM