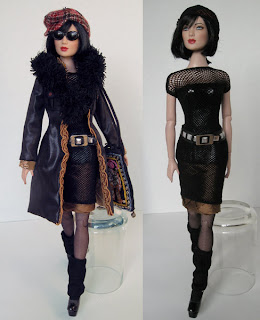 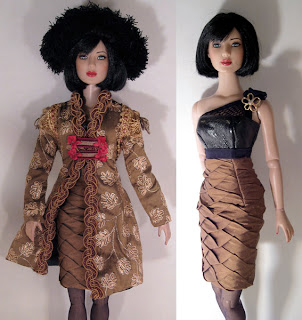 and so it ends......fantastically - just like it started. And we would not only like to applaud the winner of this final challenge, Dal Lowenbein, but it is also time to crown the overall winner, Emilia Nieminen, and to proclaim the People's Choice as Lori Lyon. What an achievement for each of these ladies!! But we also don't want to overlook all the talented designers who participated. We have seen an extreme amount of growth and the wonderful fortitude necessary to work through a tedious competition like this one! Congrats all 'round!!!

Now we must digress a bit and give you some information on our final ongoing judge, guest judge, and sponsor that was omitted during our holiday hiatus.

Our final ongoing judge is like many who love Barbie. She enjoyed Barbie during childhood, then reluctantly gave her up as the teen years approached. However, a gift from a friend brought her back! It wasn't Shayna's intention to get so hooked again, but her infatuation grew and so did her collection of dolls and doll clothing in 1:6 scale. Today Barbie is joined by lots of friends including Dollikins, Fashion Royalty, Monsieur Z, Momoko, and more. 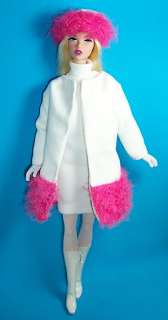 In 2004 Shayna began to want to sew for her dolls. It only took buying a pattern and some fabric to get her going. Today she's totally obsessed with creating new wardrobe choices for her bevy of dolls, and sometimes even a customer or two. Shayna limits the saleable items she will make because she works full-time and sews for her dolls primarily as her creative outlet. Therefore, a maximum of two of one outfit is made - one for her girls, and one for sale to her mailing list.

Fit is key, and whether using a pattern she's bought or made herself, Shayna works on each pattern to make sure to get the most flawless fit possible. She works with the best quality fabrics, and washes and soaks many to ensure no staining on the doll. Lining garments or finishing seams is determined by what is needed to create the best and lasting garment. Shayna also makes complimentary jewelry and other accessories for her outfits, which may occasionally include a new pet. The overall appearance, quality of her garments, and limited availability have made her outfits so desireable that she now holds private auctions for her mailing list. If you're interested in seeing more of this artist's beautiful work, check her website. 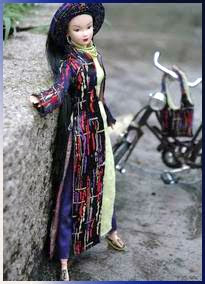 For this final round we were happy to have Rudi Teruel from R&D Fashion Dolls. Rudi is a familiar face at doll conventions, and it was our pleasure to welcome him as a guest judge. R&D Fashion Dolls was the first shop of its kind in Taipei, Taiwan. It opened in May of 1999 and has been growing strong ever since. This international company is an internet success that specializes in many types of fashion dolls. Popular ones from the United States are Barbie, Adele & Veronique and Monsieur Z dolls; and from Japan: Petworks' Momoko, ANNZ, Jenny and her friends, Volks and other Anime dolls, Blythe, Pullip and RUNE dolls. 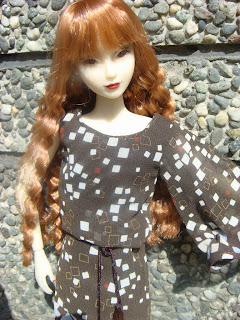 R& D Fashion Dolls are also the exclusive distributor of their own wonderful Susie doll that debuted in late 2003 and the Susie Deluxe that became available January 2007. Their ball-jointed dolls include their own Angel dolls line which includes a bevy of beauties that debuted in the fall of 2005, and their Mensjaro line, which are the male counterparts to the aforementioned Angels. R& D Fashion Dolls also carry a nice selection of wigs for some of their dolls. For more information on their dolls, you can check out the website.

For his part as guest judge of Challenge 8, we found Rudi's comments during the scoring very insightful. We hope his comments as well as those of all the judges will aid all who participated, in their future endeavors.

The Azone Store and PBFactory are two online stores run by Denise Travers and Larraine Elcock. Denise is a stewardess and doll collector who flies to Japan frequently. During her travels to the Orient she became interested in Azone clothing and developed a desire to create an online store for these products. Also, last spring there was a movement of discontent against high eBay charges, and Denise approached Larraine Elcock, another avid doll collector, to start an online Auction aptly named Auction Fever. Here these ladies have developed the best of two worlds - a place to avoid high eBay fees, and a venue to showcase some of Denise's Japan-found items in auctions. Also, in the spirit of giving back to the community, these ladies have run several charity auctions.

After achieving success with their auction site Denise and Larraine met with Azone and PBFactory (a doll sewing notion manufacturer) at the International Fashion Doll Convention (IFDC) to present the idea of a North American online store for these company's products. Both companies agreed, and the stores became a reality. Today the stores and the auction site continue to be a success. So, it was a natural that both Denise and Larraine would want to sponsor Larraine's CDDC. Together they contributed gift certificates, and Larraine also contributed Antoinette dolls. Information is readily available about these venues on their websites: Auction Fever, Azone, and PBF.

It's been a fun ride for all of us who participated in CDDC whether we entered, watched, or cheered on our favorites. But will there be another competition? Well, at the moment that is not completely out of the picture, and it is up for consideration, according to Larraine. But, let me be clear here, she has only said NO final decision has been reached YET. You see, Larraine is part of what will be revealed below in our big announcement, and she'll be busy for awhile facilitating hosting for it. She also thinks our new winner, Emilia, should be allowed to enjoy her "reign" at least for a little while. So, be sure to follow the blog/newsletter noted below, because when and if we do have another CDDC, it will be posted there.

And, finally, the BIG ANNOUNCEMENT! 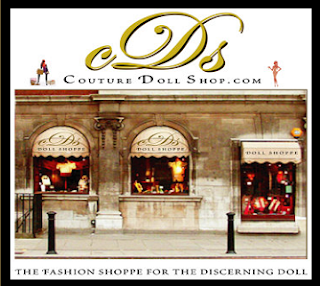 As many of you know, CDDC was the brain child of Larraine and a few friends. But even before Larraine launched CDDC her friends had been working on another idea. They had decided to open a "multi-leveled" online Couture Doll Shop at couturedollshop.com. On the different "floors" of this shop each of these brainstormers would showcase their items for sale. Their plan involved power in numbers; and that power would be realized by the traffic they could drive to the site by working TOGETHER to promote the site.

However, when they began to see all the wonderful talent unveiled during CDDC, the group took their plan back to the drawing board, and came back with a new presentation for Larraine because she had already agreed to host the original doll shop idea. They had decided to throw open the doors to couturedollshop.com and give the wonderful designers from CDDC a chance to actually have their own doll shop there! And, they'd decided to also invite other doll merchants. Yes, shop owners would include couture doll designers to repaint artists and everything in between. They'd not only work together but they'd also work with the merchants who came on board. Yes, indeed, they wanted to create the only place a discerning doll collector would need to visit - a one-stop shopping experience like no other for doll collectors! And, their sales pitch prevailed - because Larraine agreed and is hosting the entrance to this venue through the Auction Fever website!!

If you'd like more information simply check out the Couture Doll Shop blog/newsletter. We'd love for you to be a part of this wonderful new endeavor, so take the plunge and get the information. For under $5 per month for premier shop owners, you can be a part of it! But, if you hesitate you won't be in time for the Grand Opeing - late February - or early March, so just click that link, request the information, and you'll ensure your spot in time!

Now, although I don't want to quit riding this particular merry-go-round, I'm afraid I must. Adieu, my doll friends...."maybe" for a little while. Don't be sad; Larraine is leaving you with a new doll project to work on - hope we'll all be there.........together!!!!!!! Take care and happy dolling!!
Posted by Unknown at 8:49 PM