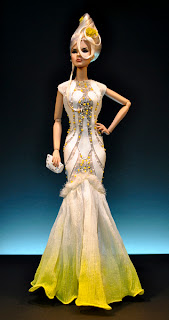 Yes, there was no doubt who took this win -- again, Huckleberry Jackson! He has a firm lead with his 304 points, but with four other contestants with 250 plus points, there is no time to let down your guard - so we'll be watching with bated breath to see how the last two challenges score. 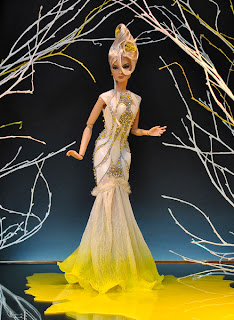 In Huckleberry's quest to satisfy the modern runway rococo meets the Oscars challenge, he says he wanted to "...work with the whole spirit behind the rococo style and make a contemporary new piece rather than just redoing the shape of a rococo dress."


He used some interesting fabric including a fine cotton stretch net and a silk crepe that he hand dyed. An odd pairing of plastic shell-like shapes, pearl beading, and crystallized Swarovski elements worked deliciously to provide some playful overdecoration to this stunning gown.


Adding to the overall styling of this creation were an over the top hairdo, ultra high heels and a simple clutch bag. All in all, not even difficult to see why this one conquered this win.....and the photography win, also!


Honorable mention for photography goes to: 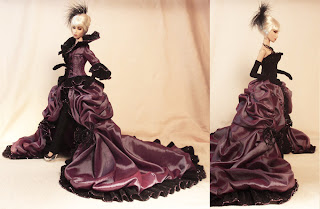 Maria Ustynovska
Congratulations to the winners, and all the contestants. Even though some outfits may not have fit the challenge, all of the entries left behind a beautifully executed presentation for this competition.
Now we're going to turn our attention to the mahvelous permanent judges for this competition. You've already been given a full report on what Steven Fraser has been up to this season, now let's check out what Tom Courtney and Rob Thompson have been up to since the last challenge. 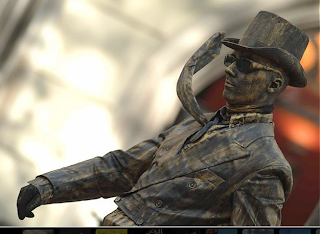 Since we last caught up with Tom Courtney he has left his post as Art Director for a collectible doll company. As a freelance artist he is working on branding more specific to his own art than to art he creates for others. Toward that end, and in anticipation of pursuing other new venues to work for, this creative professional has been finalizing his online portfolio. If you'd care to follow the progression of this delightful work of art, just visit his website.


There hasn't been time for much in the way of doll art, instead he has been rather busy learning new web-building software such a Dreamweaver, Fireworks, and Flash. Though a slow process, it has been quite constructive. He's also had to spend a lot of time researching and implementing various social media strategies, which seem to change daily, to include in his freelance potential. However, once a doll aficionado, always one, I'd speculate. And I for one look forward to his next creation whenever he can carve out some time for his girls and guys! 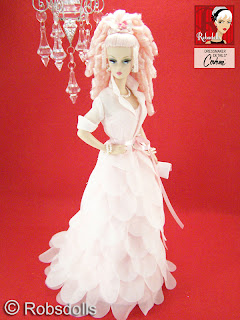 Since we last caught up with Rob Thompson he has been busy doll-wise. One of the dolls he is most proud of doing this past year was the 2010 Barbie convention live auction doll, “Pretty in Pink”, done in collaboration with Steven Fraser of Dressmaker Details. She sold for $3,000.00 for the charity, and there are some wonderful pictures of her at this link.   He's also updated his gallery with loads of eye candy available over here.


His already large volume of work has also welcomed a new brand called “Razor Rain by Robsdolls”. This line is all very dark themed, edgy, or Gothic themed dolls. This line has been selling well, so Rob will be featuring a new “Razor Rain” logo, but all of his designs will still feature his Robsdolls logo in the corner. Rob needed this additional brand because these dolls don't fit the pretty, mainstream doll image that he has become known for. But, not to worry there will still be plenty of his original style designed. "Razor Rain" will be used as his brand directed to the Japanese market, and was also designed not to confuse existing customers who don't really get into the dark edge Gothic dolls exhibit.


One of his biggest projects, and something Rob is extremely proud of, is his charity auction for the NOH8 Campaign. He is organizing an online auction for this coming Fall that will feature one of a kind dolls made by some of the most celebrated and well known doll artists and designers in the doll world. The auction will be featured and publicized by many of the best known doll dealers, and will also be covered in FDQ magazine. The NOH8 Campaign is going to take payments for the winning bids directly so that the winner will get the charity donation tax deduction due to Rob's efforts, and their logo will be put on the dolls for the auction, also. He is even working on teaming up doll artists who don’t sew with doll fashion designers that don’t do OOAK dolls, so it is going to be a huge project. All of the dolls will be done in the NOH8 Campaign photo style which will include duct tape on the dolls mouth with the campaign logo painted over the face, and all the fashions will be white. You can see the style here at their website.. Rob hopes all his time and efforts will bring in between $10 and $20 thousand dollars for the charity.

If that weren't enough, Rob continues to stay busy with commission work and donations to the various charity auctions and conventions he is involved with. He is also working on a couple of articles for FDQ, and has been toying around with writing a novel. All I can say is, where DO you find the time, m’dear, to do all this - and judge CDDC??