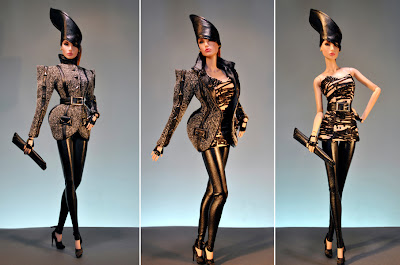 With a near perfect score of 79, Huckleberry Jackson rises to the top to become the winner of Challenge Number 3, and nails down yet another challenge win! Congrats! 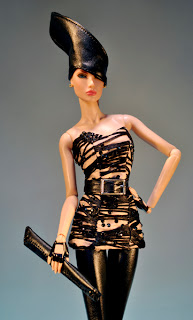 Over in the corner, CDDC's fearless leader, Larraine Elcock, and the Manager of Couture Doll Shops shook their heads wondering who might win it all. "With only 24 points separating the top four contenders it's anybody's race, so cheer on your favourite," said Elcock. "Hum, sounds a little like American Idol!", Dot remarked.

And it's so true - did you realize that every artist needs a little praise. So don't forget to give all the talented contestants a nice attaboy remark on the CDDC Yahoo group for just submitting their entry every 2 weeks - it's really no small feat. Also, while you're over there, give a special shout out for whoever you feel demonstrated the best entry for any particular challenge. How will anyone know otherwise? 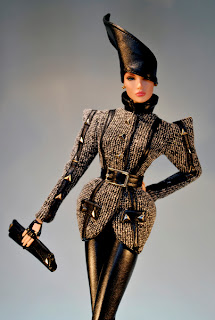 We all know Huckleberry has a lot of talent. What was described by this artist as a challenge that was a "bit confusing at first," yielded a stunner that translated the outerwear challenge so well. This haute couture outfit sported a dress that was inspired by bondage but was not bondage, and gave us a lot of allure and attitude to ooh and ah about! In fact, it left your blogger wanting to be able to reach out and "capture" that hat!! 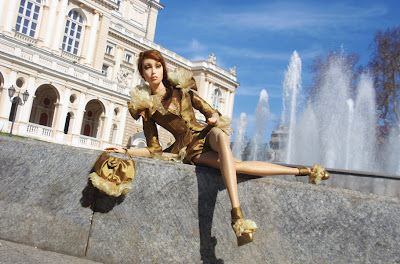 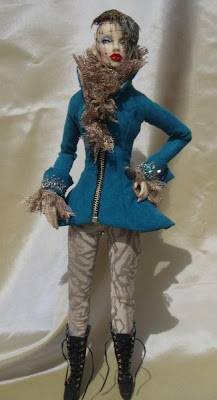 And now for that information I promised on your guest judge for Challenge 4.


Jim Faraone – If you create, he can relate! 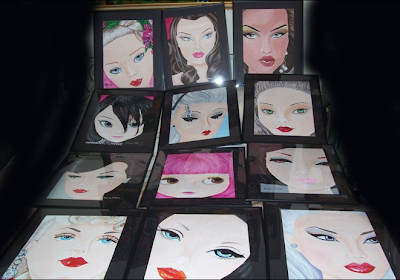 Long before this craft of creating something different from an existing doll (an OOAK doll) became so popular, Jim Faraone was an OOAK artist in the biggest sense of the word. He trained as an artist at The School of Visual Arts in New York City, and is such a talented artist that his artwork has even been on display at the NYC Metropolitan Museum of Art. But Jim, has been an avid collector of dolls, paper dolls, miniatures, paper toys, 40's and 50's plastic dollhouse furniture, metal dishes, and autographed celebrity photos for many years. And when his interests turned to creating OOAK dolls, the doll world not only gained an incredible doll artist, they also gained a wonderful doll friend! 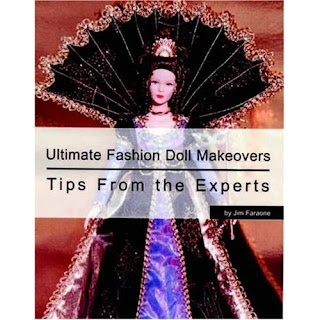 Jim's doll work has made a natural progression since he began his journey of developing OOAK dolls. He wanted his 1/6th scale dolls to have their own personality, so he enhanced their makeup by even rooting eyelashes and hair. He developed elaborate hairdos for his glamour girls, too - braid, waves, and chignons come to mind. And when it came to developing their wonderful gowns, he became a beader - but again Jim took it to a greater level – in fact, Jim’s OOAKS are beaded wonders!

Jim didn't stop at making OOAK dolls, though. He actually began to chronicle his process and produced the final version in book form. To date he has had six books published; five in the series of Fashion Doll Makeovers, Learn from the Artists; and one titled Ultimate Fashion Doll Makeovers, Tips from the Experts. But Jim has never just been about self-promotion. 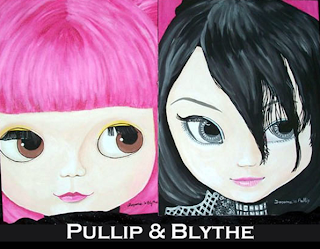 Jim Faraone is a true artist's friend. and many of his talented friends are the artists in his books that people learn from. They are also the friends who today support Jim in his best endeavor to date, his own convention, the International Fashion Doll Convention (IFDC). It is currently held in Las Vegas in the summer, and not only offers several days of fun with other doll friends, it is also a venue for some of the most informative workshops, a marvelous showcase for artist’s work, and a place where new fashion dolls are unveiled!

Jim has worked diligently to see that new work of professional and non-professional artists is displayed. He is an avid believer in supporting the artists and giving them the recognition they deserve. 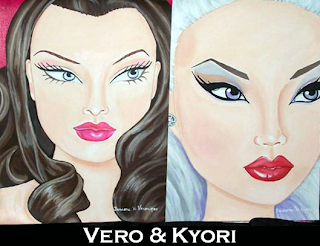 Today Jim creates miniatures and paintings of dolls as well as copies of famous artwork for dolls which are prizes for the IFDC. The convention website is at http://www.ifdconline.com and you can see everything he has created for the 2011 IFDC at http://www.texasdolldesigns.com/jimf2011.html
So you may want to listen up when Jim makes his critiques. You can depend they are given by a caring artist, and hopefuly all the contestants will benefit from his take on their work.